Its been a while since the last post from Siberia.. its taken a while to settle back into a routine, the fierce pace of work has meant the employment of more people and the advancement of all projects.

I’m going to ignore most of them for this post and concentrate on the work evolving in the studio, in preparation for two shows this september at ‘Messum’s’ in Cork St London and ‘Messum’s Wiltshire’ (the massive and beautiful Barn at Tisbury  which Johnny Messum has developed in the last two years to become a major arts centre with an international reputation.) The barn will host the large works and London the smaller studio bronzes. This will be the first time ‘Messum’s have shown the same artist at both venues at the same time and represents a large amount of work for me and the team.

Two films are also being made, both to be previewde at the barn in September.

The Barn will be the location for the launch of a major sculpture commission which i’m undertaking for the Sainsbury Centre in Norwich, funded by the ‘Paul and Louise Cook Foundation’, it’s a development of ‘The Man of Stones’ and will be an 8ft figure adorned with rock and material from the site and surrounding countryside.

The Sainsbury Centre for Visual Arts

https://scva.ac.uk/
So….I’ll stop talking and start the imagery they’ll be the odd caption…
This is the ‘Man of stones’ study.. He’s adorned with his stones and detritus of his environment, like a Caddis fly larva, building an environment from his surroundings. 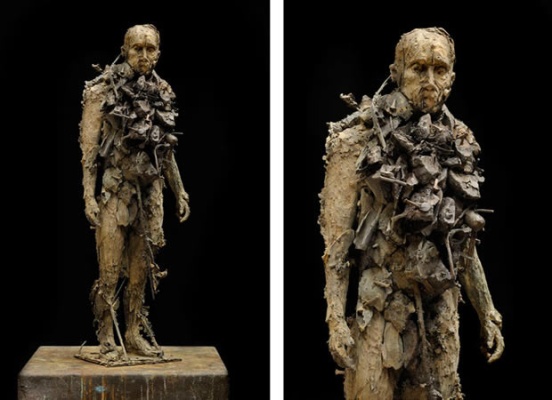 The 9 ft figure in clay  will shrink to about 8ft through the casting process.

This is a wax flint cast from a flint from Covehythe .. a constant source of inspiration for me. This will form the basis of a collection of stones from Norfolk and Suffolk beaches which will adorn this giant.

Here he is earlier on with Bill Jackson implanted for scale, Bills been filming the whole process of modelling and is making a ‘poetic’ filmic response to the work. the rushes look amazing and like the miners project films I’m learning a lot from the viewing.
In fact you can see some of the miners heads in the background, I’ve modelled around forty so far, one more session to go and then we start on the next phase of the project . more on that in a later posting . 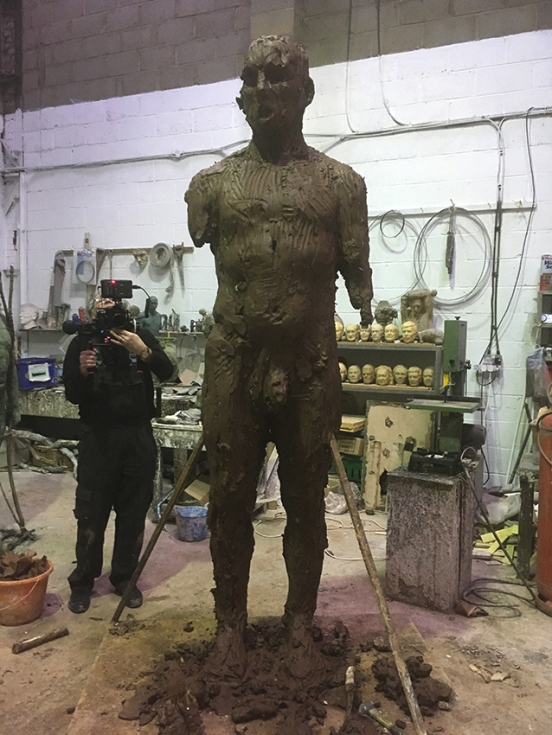 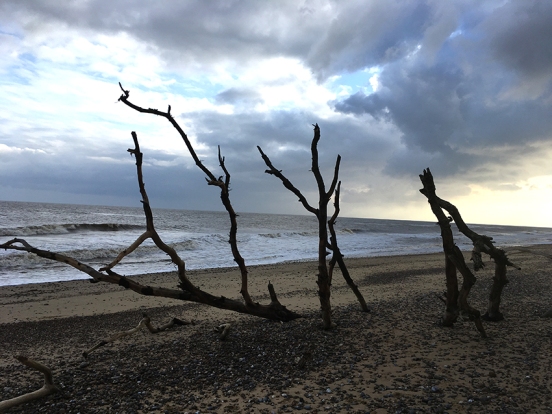 Heads from the mining community of Doncaster.. 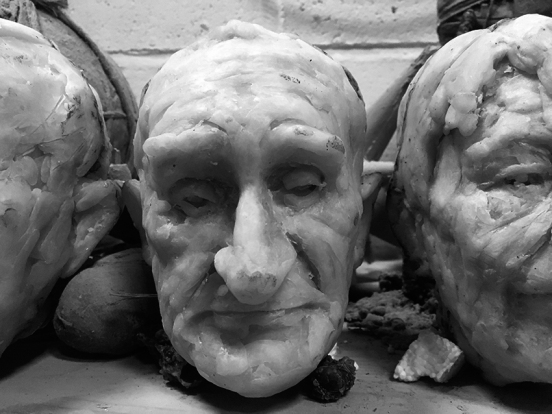 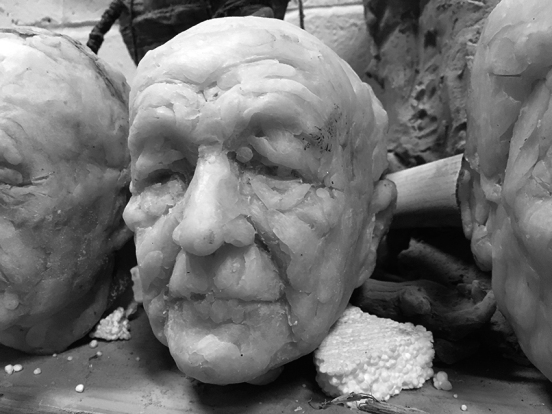 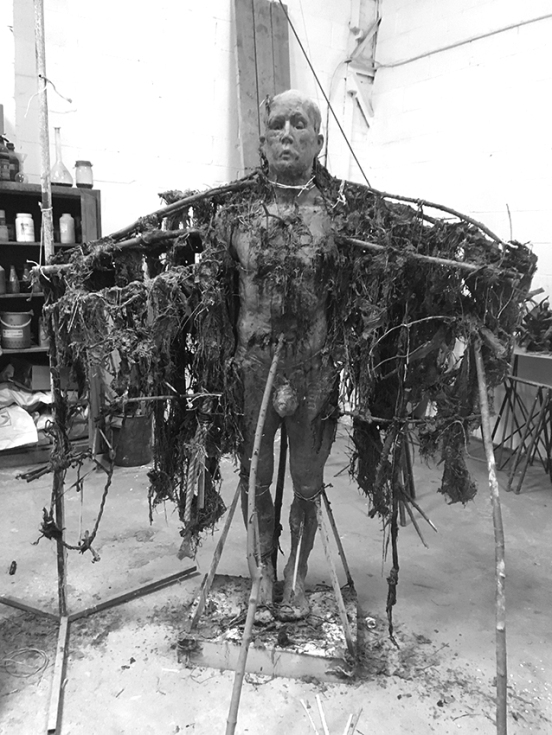 The severed sections (with the pouring channels and air vents applied) are hung from frames and boxes are built around them, in which we pour the casting materials.. up to 80 buckets of plaster and grog a time.. taking three people two days to fill! 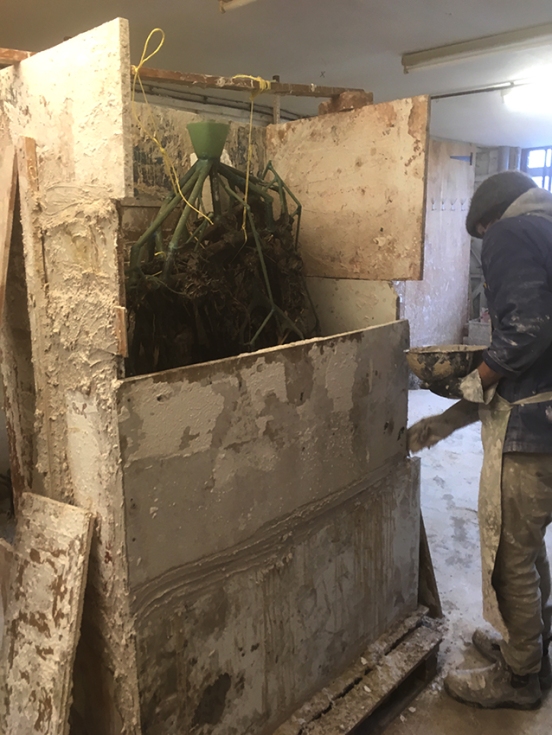 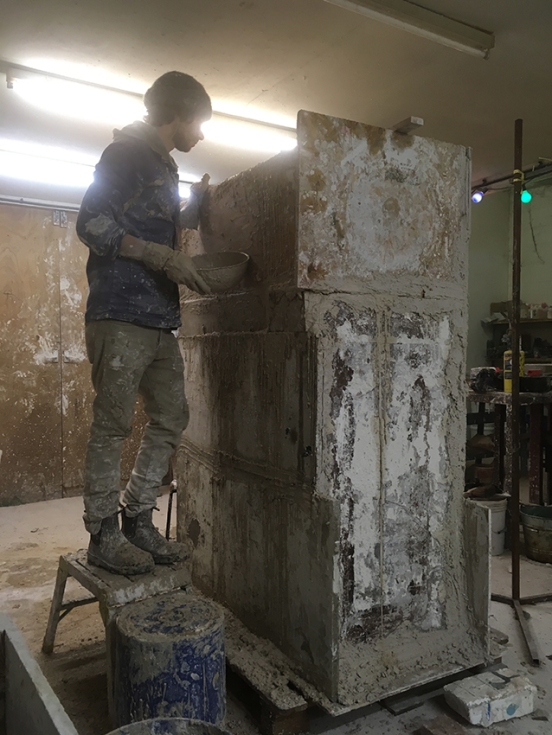 Nhung next to one of the ‘investements’ beautiful in of themselves.  See the Colossus mould progressing in the background..on a bronze shin to the right… 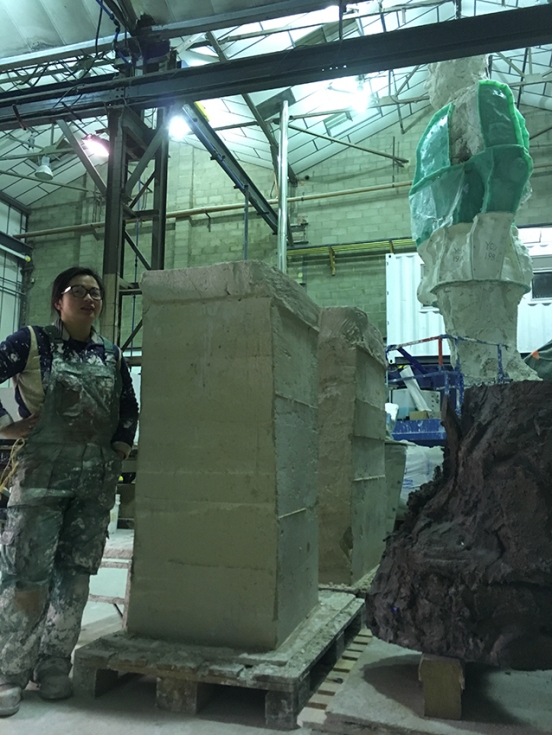 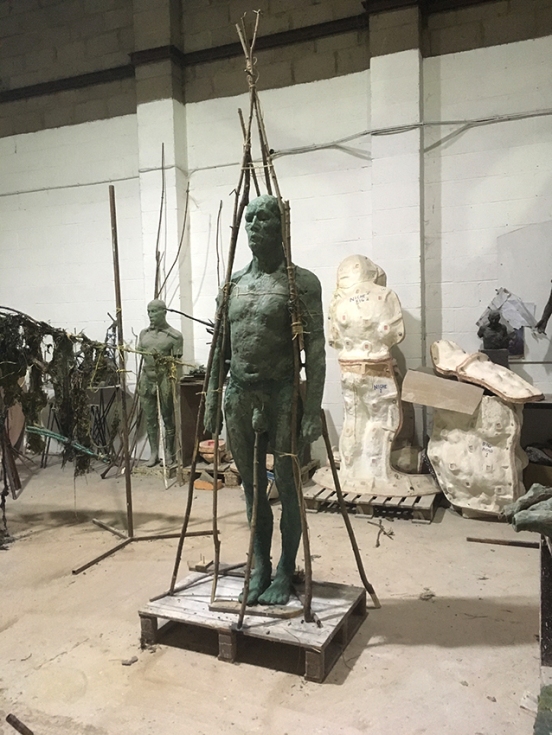 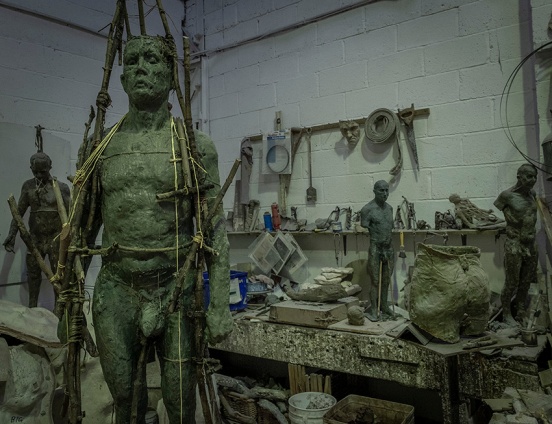 Her’s a bunch from the Fire Station studio.. chaotic isn’t the word! the studio is changing every day at the moment as my mind try’s to reconcile a myriad of ideas… long may it last eh!  can you spot the dog?1 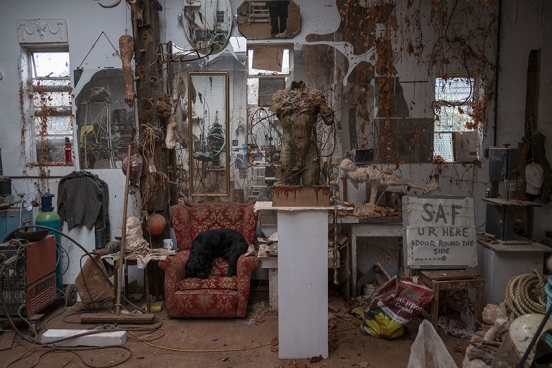 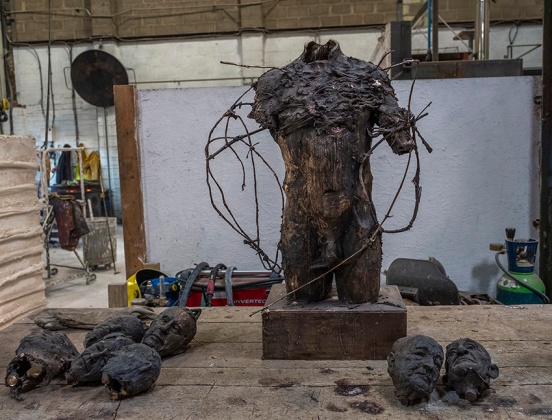 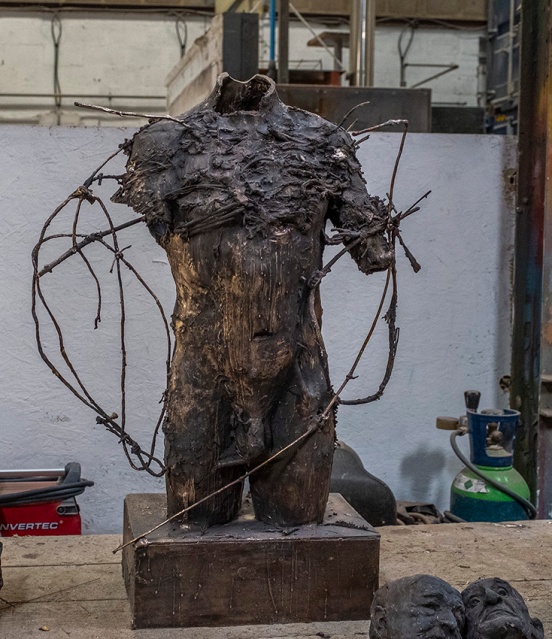 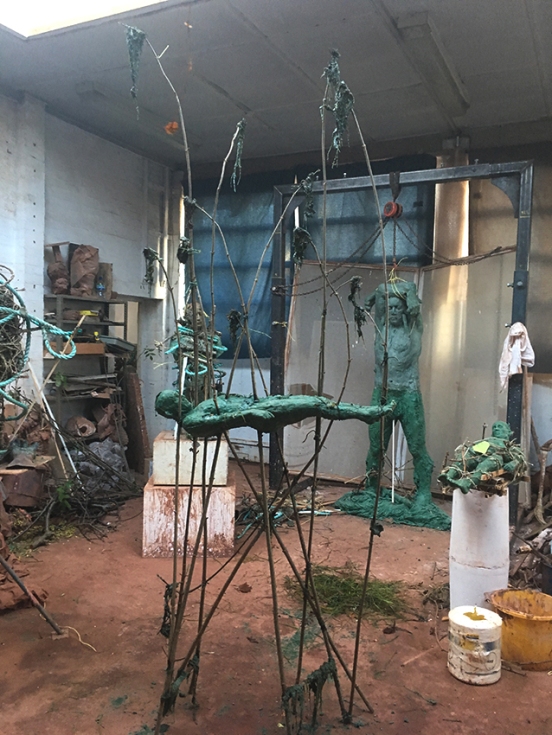 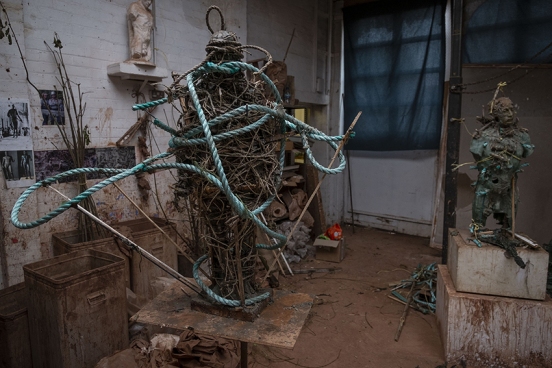 These Siberian fish traps really left an impression, I think you’ll see them filtering through.. in fact the Reindeer Herders traps and snares have stayed with me, though i failed to take good photos of them!! 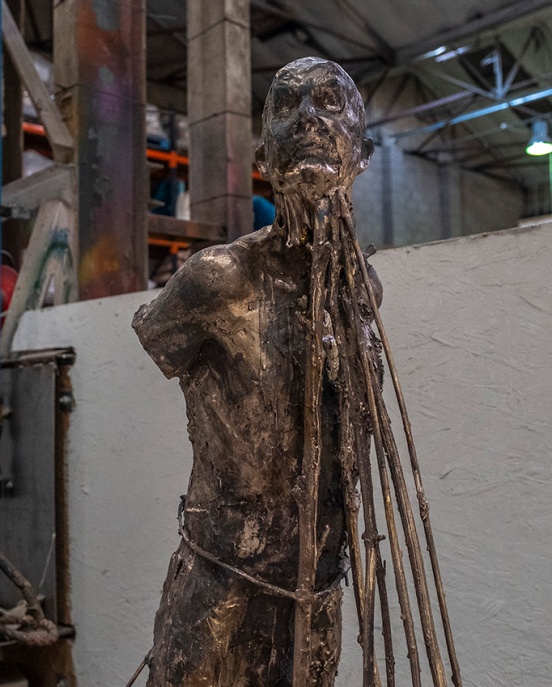 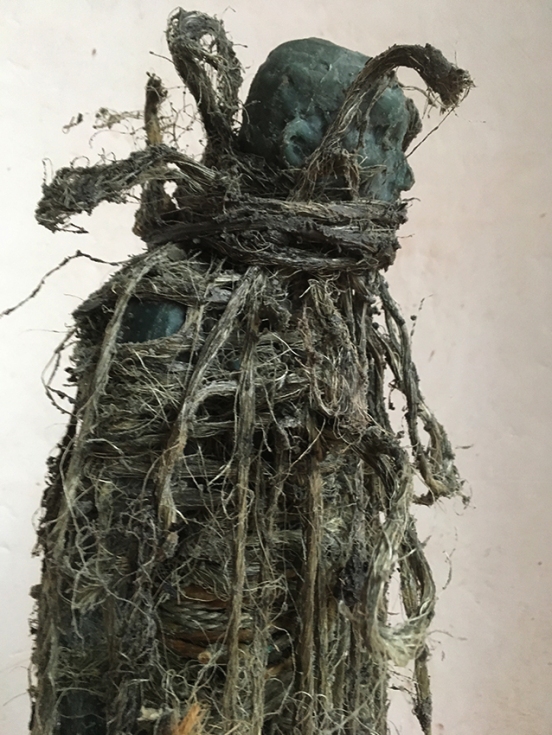 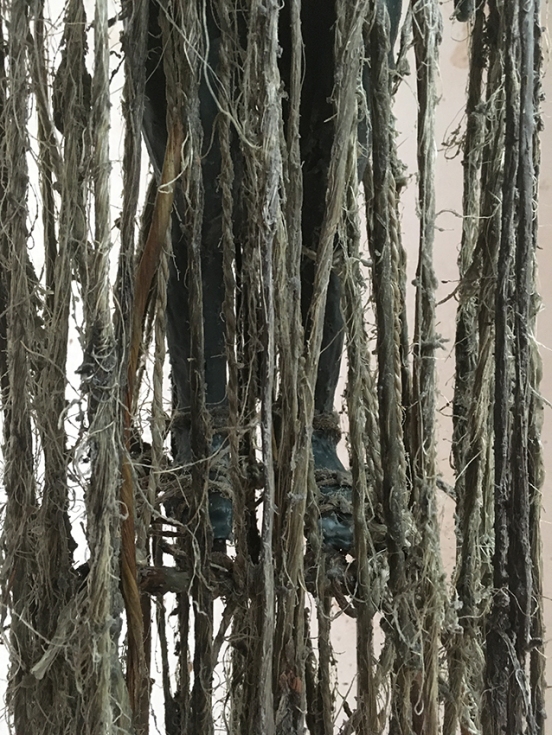 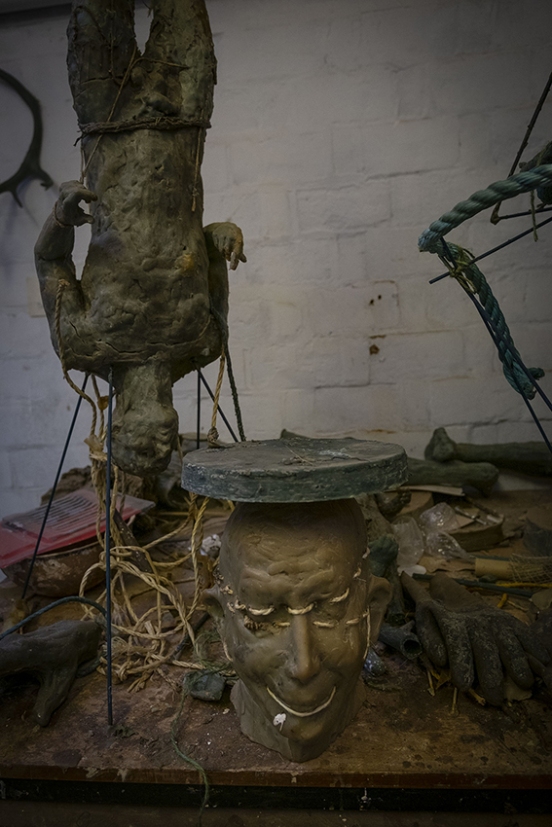 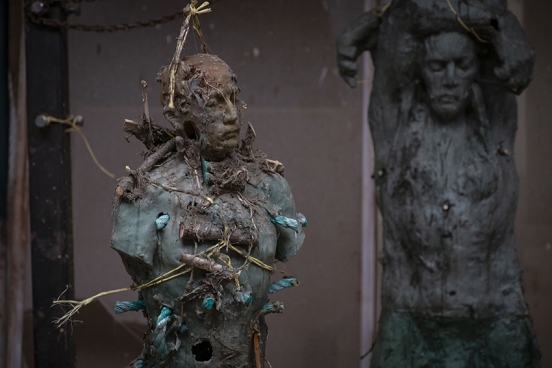 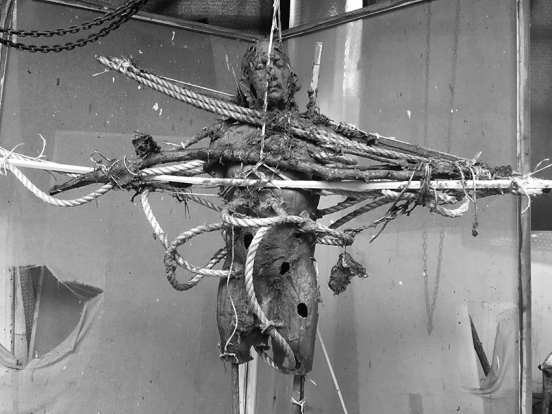 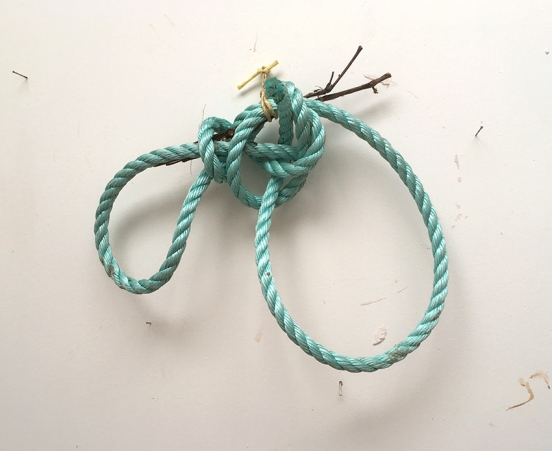 Leaf man on a frosty morning

Bill took these at White House Farm in Glemham (Suffolk), before we moved the sculpture to Salisbury Museum overlooking the Cathedral, where it will live for a year or so.. 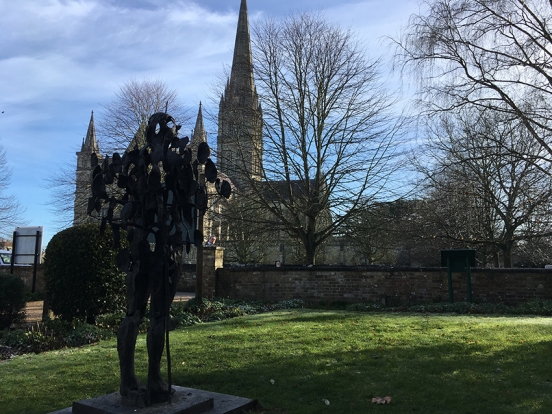 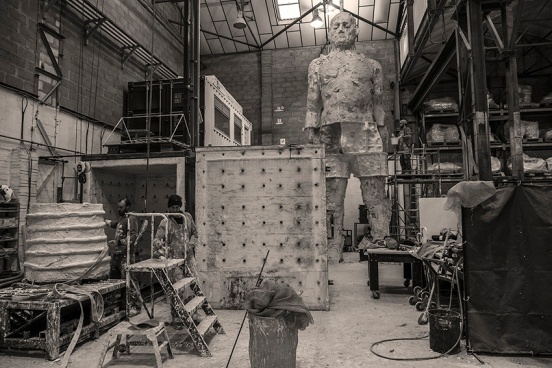 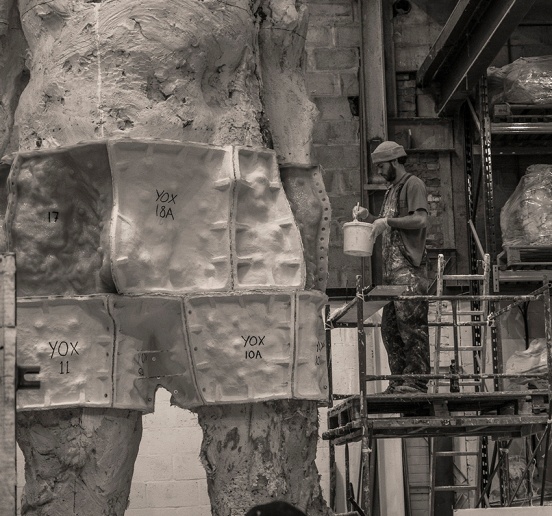 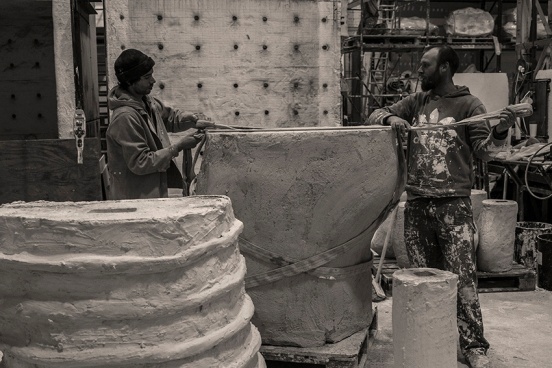 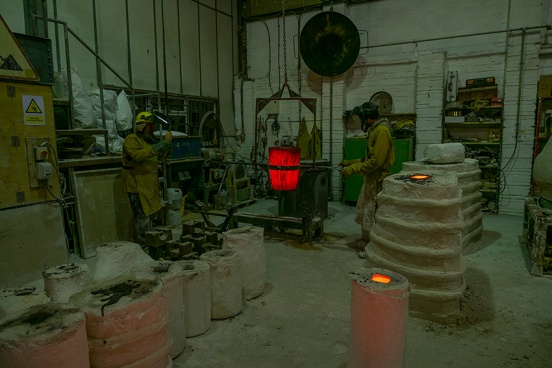 and a couple of mine.. 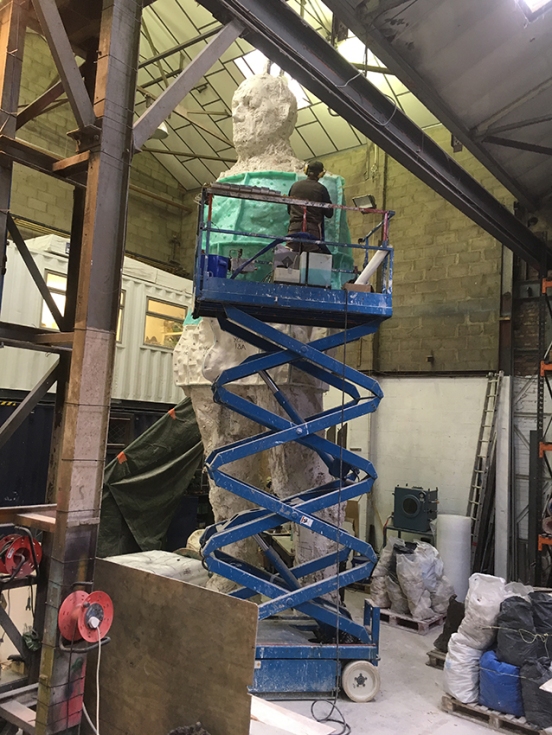 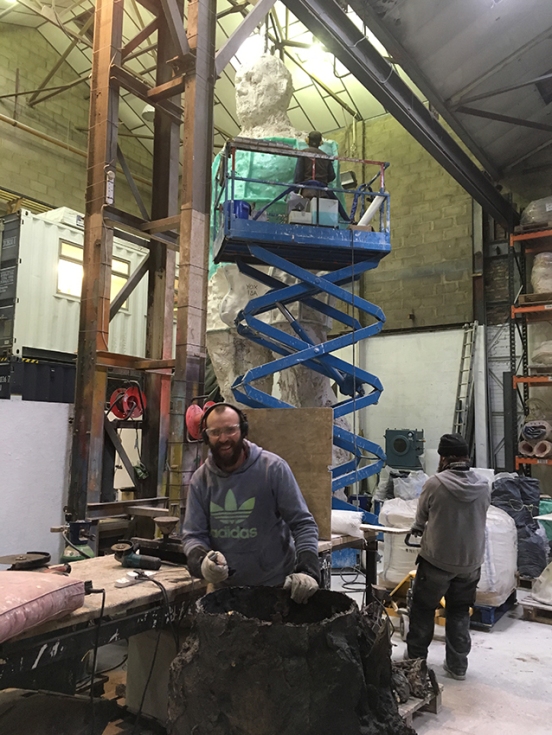 Goodby from us.. more treats in store soon… get in touch and comment –like me!! .. it’s a lonely cyber world I inhabit…